Four Reasons Your Leadership Coach Could Also Benefit Your Team 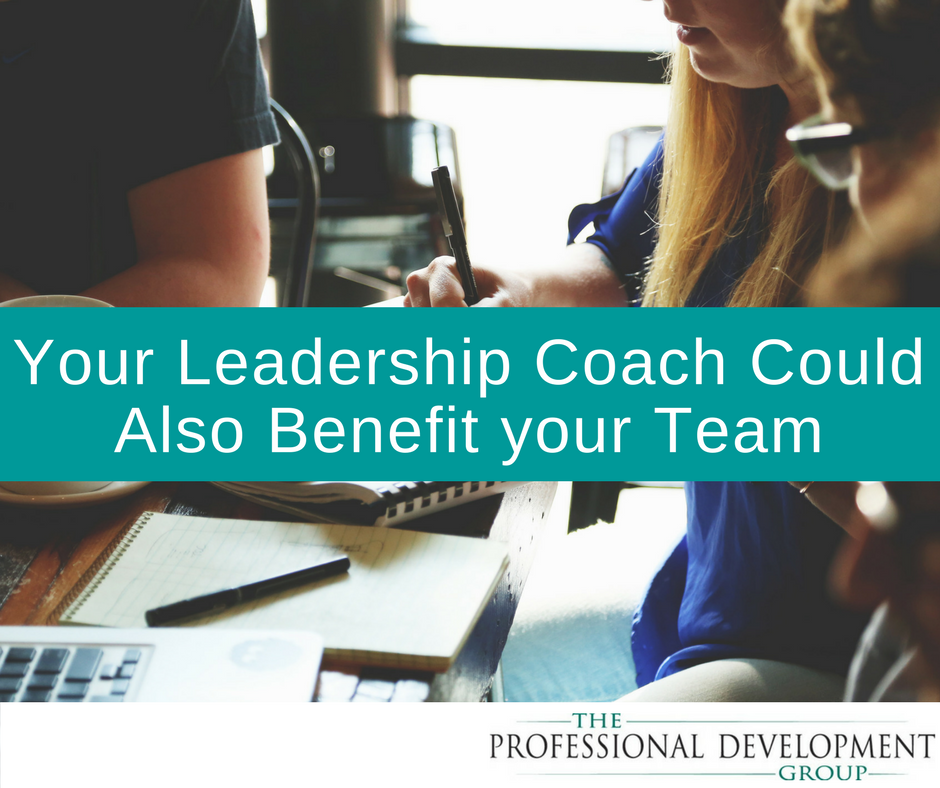 The field of executive coaching has been evolving. At first it was considered a hush-hush remedy for top executives with valuable specialized knowledge, but sorely lacking in some skills. Then, once people understood the value of coaching for career development, it became a coveted perk for those on the high potential track. Eventually, executive coaching morphed into leadership coaching, because it wasn’t just for upper-level executives anymore.

Now it’s time for yet another evolution, especially since the business of leadership has become increasingly more complex. One person might have the helm, but leadership teams collectively plot the course and steer the organization forward. And, for every leadership team, there are layers of other teams coordinating within themselves and working outwardly to keep the business running smoothly.

Through my work as an executive coach and high-performing teams consultant, I’ve come to appreciate that leaders aren’t the only ones who can benefit from self-awareness, focused skill development and expertise on best practices — from hiring to performance management to working well together. In fact, workplace culture improves rapidly when I work with a whole team in addition to their leader.

For the past few years, executives who have hired me as a coach have shared an epiphany: If knowing about my own strengths and blind spots has helped me understand how I work best and where I need to grow, imagine if my whole team had that knowledge? And that’s just the beginning.

Effective, collaborative leadership is important, which is why there will be a continued need for leadership coaching. But there are also significant reasons to consider expanding the benefits of coaching to the whole team:

1. Teams learn to cover each other’s blind spots without resentment. Executives seek out a coach when they have some awareness that there’s a skill or skills they need to strengthen. Some might know exactly what to focus on — using time more productively, developing strategic thinking, communicating more effectively — while others have less clarity. Those in the latter category use the coaching process to learn what their natural strengths and deficiencies are so they can identify areas for growth and make better decisions about hiring team members and delegating tasks. In other words, these executives learn how to cover their own blind spots.

It’s a natural leap, then, to want to create a whole team of people who understand their strengths and deficiencies. The more everyone knows about how they work best and where they fall short, the easier it will be for everyone to communicate, delegate, and cover each other’s blind spots without resentment.

2. Teams work through conflict more effectively. Once executives gain a deeper insight into themselves, they acquire a new lens for viewing others. They see conflict patterns that can easily be eliminated through a common awareness and language for communicating and collaborating. It’s another easy leap to make: If everyone on the team can see what the leader can see, the better they can work through conflict. Team coaching can minimize the time and energy spent refereeing office disputes.

3. Teams experience accelerated growth. No team is perfect. There will always be skill deficits, whether it’s in technical know-how, problem solving or interpersonal skills. The pace at which individual team members learn and develop is in direct relationship to the amount of trust built into the team culture. Leaders determined to nurture trust make raising their own emotional intelligence a coaching focus. Once they experience the benefits of awareness, self-regulation and other dimensions of emotional intelligence, it doesn’t take long for them to want to bring their whole team along with them. If they do, the result is an environment where people feel safe while they learn, fail fast without fear, and stay focused on solutions.

4. Team succession planning is easier. Executives who have an in-depth understanding of the value each team member brings to the table are in a better position to promote people into roles where they will excel. They’ll also have clarity about who is best suited to succeed them when it’s time for them to move up the ladder. In this way, everyone benefits from having a greater understanding of how and where they fit best in the organization.

To be clear, team coaching is entirely different from the kind of team bonding that takes place at company picnics and paintball outings. Those activities can be important for building esprit de corps, but they don’t help people develop the kind of self-awareness that can have a lasting impact on organizational alignment and career development.

Successfully implementing team coaching usually starts off with team members taking the same assessments used in an executive coaching process. Then, in a retreat-like setting, there’s a whole group exploration of what the assessments reveal and how they can serve as a guide for improving collaboration within the group. Following the retreat, the coach can create individualized professional development plans, which will help leaders and team members alike in promoting growth. Follow-up tools like quarterly surveys, as needed consultations and refresher seminars can extend the learning and provide mechanisms for staying focused on individual and team goals.

As executives who have worked with coaches know well, coaching is a huge benefit because it accelerates both personal and professional growth. Then why not include the whole team? For leaders who are themselves struggling to keep pace with rapid change and overwhelming demands on their time, having a team who can keep pace with them is more important than ever. That’s why leadership coaching is expanding and team coaching makes increasingly more sense.

What Do the Eiffel Tower, Claude Monet and Executive Growth Have in Common?
Habits That Keep You Primed For Success
Four Tips to Ease Growing Pains for Your Team and Your Business
The 3 Best Tools for Developing a Team
Four Reasons Your Leadership Coach Could Also Benefit Your Team
Ready to Create a Path Toward Growth and Profitability?
This Leader Has a Plan for Inspiring Team Growth. Do You?
This Leader Has a Passion for Growth. Do You?
Do You Want to Develop Resilience to Grow & Thrive During Times of Disruption?
People Reading and Journaling – Be A Life Long Learner
Reflections on Passion and Personal Brand
Strategies for Improving Team Learning
Imagine Your Best Year
Mistakes in Influence
Using the Grapevine Are You Creating Vinegar or Sparkling Wine?
Commitment, Action and Accountability
Conversation for Commitment
Conversation for Action
People Reading
Mentoring Inspires Employee Loyalty!
More on Conversations for Creating New Possibilities
Change is everywhere!
"Mentoring An Age-Old Idea That Works Now"
Create a Conversation for New Possibilities
The Importance of Individual Development Plans -- Part I
Conversations That Inspire Growth
The Importance of Individual Development Plans -- Part II
Shawn Kent Hayashi's Professional Development Plan Process
Keeping Top Talent-Succession Planning
How do I change my boss's perception of me?
Stop Worrying About Getting Cut From the Team: 7 Steps to Becoming a Better Collaborator
3 Ways To Benefit From a 360 Survey
4 Common Mistakes People Make in Dealing With Conflict
Pausing and Reflecting
Fast-Tracking Leadership: 6 Steps for Mastering Empathy
Getting a head-start on strategic planning
To Grow or Not to Grow: Create the Right Team to Achieve Success
What Do You Really Want to Give? Gift Ideas for Everyone on Your Holiday List
Where Do You Want to Grow? Evaluating Your Professional Competencies
Do You Know What Might Be Stunting Your Company Growth?
Want to Be Known as a Star Performer? Renew Your Resolve
Is your employee morale healthy enough to support growth?
Why Jon Stewart Doesn't Fear Losing Top Talent...And Neither Should You
Want to Increase Profits and Attract Customers? Let Us Help
Want to Distinguish Yourself? Develop Futuristic Thinking
We're Growing!
2 Ways to Get Your Boss & Your Team to Listen to You
This Leader Bust Through a Growth Ceiling. Can You?
Four Reasons Your Leadership Coach Could Also Benefit Your Team | The Professional Development Group