This Leader is Ready for Anything. Are You? 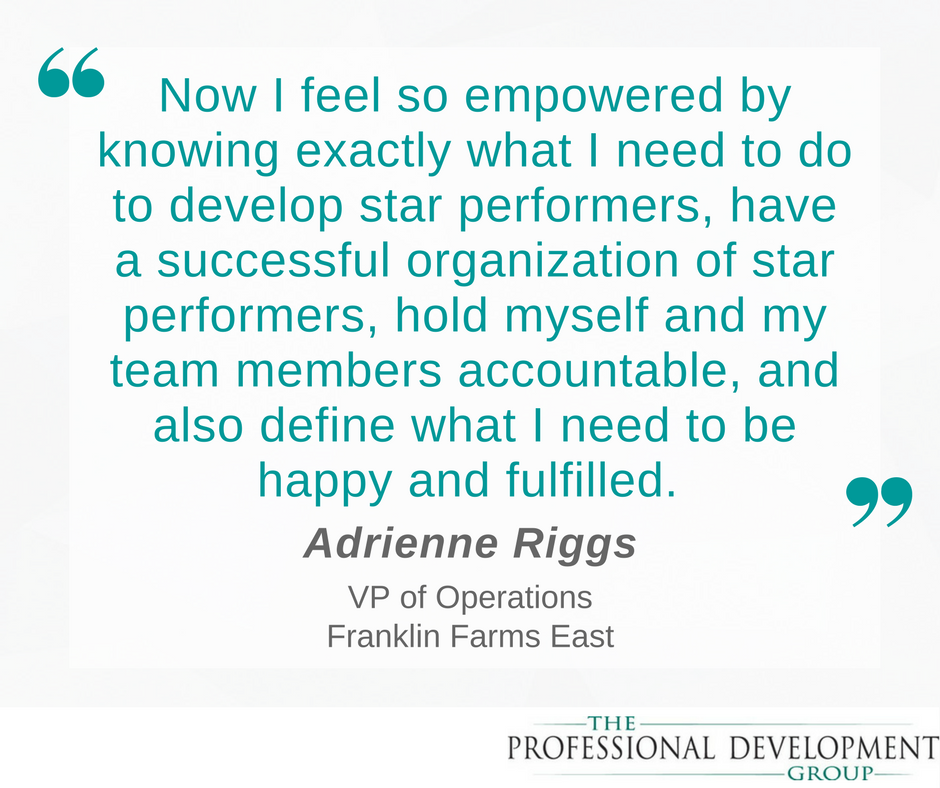 "I'm in a meeting -- sitting on pins and needles -- because there's incredible tension in the room," recalls Adrienne Riggs, VP of Operations at Franklin Farms East.

"I didn't know what to do. I just felt swallowed up by the conflict. It was definitely one of those moments when I wondered: Maybe I'm not cut out for executive leadership. Maybe there are parts of me that aren't a fit for this role."

Everyone who has taken on the challenge of leadership has wondered the same thing. So what distinguishes the inspiring leaders who grow and succeed from the ones who flounder?

Adrienne Riggs can tell you.

After her father, the CEO of the family's dairy manufacturing company, began to transition some of the leadership responsibility to her, she joined the executive leadership team and, in three years, accelerated her own growth and that of her company.

Recognizing a need to expand her leadership knowledge, Adrienne enrolled in a professional development workshop led by Shawn Kent Hayashi. "We were talking about bringing your talent to work and developing your personal brand, like who you are, and I realized that I didn't know who I was as a leader."

"Inspired by the workshop, I changed my self-talk. I told myself: I can do this. I can become a leader. I can figure out what I need to know so I can bring value to my company. And I began to believe it!"

A Thorough Understanding of Self

So what does a leader need to know first? Adrienne started by understanding her strengths and blind spots.

As a first step, she completed the Talent@Work® assessment, which not only gave her clarity and confidence, it led to the realization that Corporate Entrepreneurship -- the focus she had chosen for her MBA -- was not the right path for her.

"After talking with Shawn, it was clear to me I'm not the one creatively thinking of new opportunities, new ventures, and being innovative. I'm the one who brings support to the organization for the people who can do that. And that was an amazing experience -- to say that I don't know how to do that, but I can hire people who do."

Discovering who she is and how she is wired gave Adrienne a new appreciation for how other people differ, and how those differences can add value to a team -- if you're aware of them. Now she's in a better position to value her own strengths and those of her employees.

A Determination to Acquire New Skills

Adrienne wanted to further enhance her "people skills," so when the workshop ended, she began working with Shawn Kent Hayashi as a leadership coach. The goal? To develop mastery in essential leadership skills -- like handling conflict.

As a result of the coaching process, Adrienne is no longer paralyzed by office strife. Instead of feeling pins and needles after a tense discussion in a recent meeting, she knew exactly how to address the emotions that surfaced in the disagreement:

"I stopped by to talk with the employee and asked if I could have a minute of her time. When she agreed, with a smile on my face, I shut the door, sat down, and started by sharing what I admire about her and what she does to bring value to the company. And then from a place of curiosity, I said, 'I couldn't help but notice that you seemed upset when we discussed this topic during our weekly meeting. I'm not sure what happened -- would you share your thinking with me?'

"Our conversation resolved the conflict and at the end of it, we both looked at each other and said, 'We're good! Let's move forward.'

"If that had happened a year ago, I would've been really upset about it, churned over it all day, and wouldn't have known what to do. Now I know how to craft the conversation to produce great results, so people can get back to work and focus on what's next."

A Commitment to a Culture of High Performance

Adrienne's determination to model positive interactions was born out of her vision for the work environment she wanted at Franklin Farms East: "I wanted to create a culture where people are happy to come to work, excited to grow, and motivated to overcome new challenges."

Eager for her team to learn what she had learned through one-on-one coaching, Adrienne worked with The Professional Development Group to create a High Performing Team Retreat and ongoing training sessions. These experiences gave team members the opportunity to gain clarity about themselves through assessments and build trust with each other by raising their emotional intelligence. Within a few months everyone had a common language for communicating, a blueprint for resolving conflict, and a working knowledge of how to play to one another's strengths.

"I think it's really beautiful to see in the past three years how much the company has changed, has grown, has improved. I can't even believe it some days. Very exciting!"

A Vision and a Strategy for Better Hiring

A culture of engaged employees was just one piece of Adrienne's vision for Franklin Farms East.

"When my father was ready to step back from the company and smell the roses, I happily stepped up and told myself, 'I can do this. I'm going to work with my team to determine what our vision is for the future of this company."

To do that, Adrienne and the leadership team decided to open a new division. They imagined new roles such as a Supply Chain Manager that would enable the new division to thrive. But how would they find someone with the right expertise who would also fit the company culture? Again, guided by The Professional Development Group, Adrienne and the team designed a hiring process customized to Franklin Farms East.

The first step involved an organizational audit, which examined each role on the team to determine its purpose in the organization as well as the key accountabilities for success. Once that was completed, the same process was used to fill the new Supply Chain Manager role. The result?

"After the 5th day of the new person joining the company," Adrienne notes, "I was thrilled by what she had already taken in, what she had already figured out, and her ideas for what she wanted to tackle. It was astounding to think that a year ago, this role was just an idea in my head and now there's a person in front of me blowing me away with her impact!"

Adrienne and her team have since filled multiple roles, and thanks to the new hiring process, each new hire has been able to fit seamlessly into the company culture and hit the ground running.

A Positive Outlook for the Future

As she reflects on the three years spent maximizing the strengths of current team members and adding new talent, Adrienne is excited for the future of Franklin Farms East.

"There's nothing holding us back. There are many challenges that arise in our business on a daily basis, and every time we solve a challenge, it builds our confidence -- not just for me but the whole team. And I think everyone feels anything could come our way, and we'll handle it. We're committed to being lifelong learners who enjoy the adventure of growing our business."

Adrienne Riggs has come a long way from the person who was on pins and needles, fearing conflict and doubting that she might not be a good fit for her role. By seeking the help of the high performing team experts at The Professional Development Group, she created a culture where people love doing what they do, where employees can safely share their concerns, and team members know exactly what they're accountable for.

She has also transformed her vision for herself and for Franklin Farms East into a reality; she's graduated from aspiring leader to inspiring leader, and her company is adapting and expanding in ways that will secure its competitive advantage for the next decade.

Adrienne is now inspiring growth! Are you?

Four Tips to Ease Growing Pains for Your Team and Your Business
"If You Can't Spot the Gorilla, Is There Someone on Your Team Who Can?" Published in Forbes
“If You Want to Lead Change, Start Thinking of Your Employees as 'Work Stakeholders',” Published in Forbes
Valuing Quiet Team Members
Strategies for Improving Team Learning
TED Talk: The Future of Talent@Work
The Key to Working With Anyone
“Getting the Team Right”: The Secret to Pixar’s Success
Conversations for Accountability
Integrating Emotional Intelligence Into Your Workplace Health and Wellness Program
Pausing and Reflecting
Want to Resolve More Conflicts? Use Better Tools
Is your employee morale healthy enough to support growth?
Why Jon Stewart Doesn't Fear Losing Top Talent...And Neither Should You
Create a Culture of High Performance Anywhere
Want Your Team to Achieve Better Results?
This Leader is Ready for Anything. Are You?
These Executives Are Building the Future. Are You?
This Leader Bust Through a Growth Ceiling. Can You?